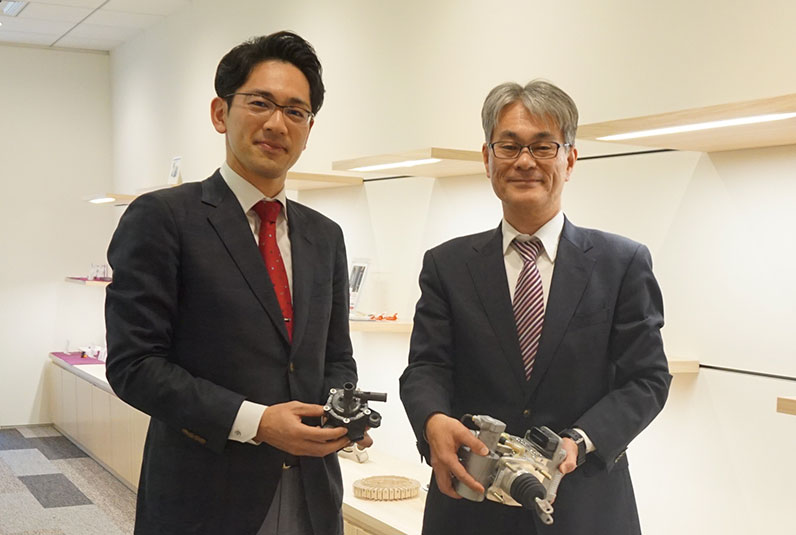 With air pollution intensifying, regions including Europe and China are setting their sights on reducing CO2 emissions and moving away from fossil fuels, so the shift from gas and diesel-driven cars to electric vehicles (EVs) and plug-in hybrid electric vehicles (PHEVs) is picking up speed.Polyplastics is also developing products that can contribute to EVs and PHEVs in order to support the realization of a low-carbon society.

How the EV Shift is Changing Automobile Parts

The Need for Insulators with High-Voltage/High-Current Resistance

Compared to other electrical appliances, PCUs and other EV and PHEV parts are intended for use under extremely high-voltage and high-current conditions. To avoid electrical leakage, electrical shocks, and other serious accidents, they need insulators with particularly high electrical properties and long-term reliability. They also need high heat resistance, as they may be exposed to temperatures around 200℃ if the EV parts are malfunctioning.

Due to their excellent electrical properties (e.g. tracking resistance*1, dielectric breakdown strength*2) and long-term reliability (thermal shock resistance), Polyplastics’ resins have been used widely as insulators for electrical appliances. Recently, they have also come to play an even wider role in the EV and PHEV market.

Polyplastics started focusing on the shift to electric vehicles from early stages. While developing materials and technologies for this field, we have kept a close eye on trends in parts such as motors, batteries, and inverters. The following resins currently play important roles in electric vehicle parts.

Mainly used in EV charging connector parts, this grade has functions to meet the standards of various countries and industries. Also, considering that charging connectors may be dropped or get run over by a car, they have high impact resistance as well as electrical properties and flame resistance.
There are also other grades of PBT that satisfy the highest standard value for tracking resistance (600V), and they are used in fields that have strict requirements for electrical properties and miniaturization. 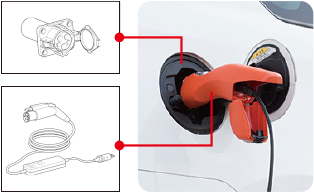 This grade was developed mainly for use in power modules and motor terminal stands.
Power modules were previously made using a method in which the resins were combined with the metal parts after being molded. But recently, to meet miniaturization and weight reduction demands for automotive parts, it has become mainstream to manufacture power modules using the insert molding system, in which the resins are simultaneously molded with the metal inserts set in the mold. With this method, however, the difference in coefficient of thermal expansion between metal and resin parts can cause the resin to crack when there are temperature changes. To prevent this, the resin needs high thermal shock resistance, but it also needs high moldability, as the metal inserts must be set in the proper position. This posed a problem because, in the past, increasing the moldability would decrease the thermal shock resistance. Polyplastics was quick to set about conducting experiments to solve this problem and succeeded in creating a new grade of resin that have both high moldability and thermal shock resistance.

Polyplastics’ resins (mainly the grades mentioned above) are mostly used in the parts shown in the drawing on the right. About 18% (580 cases) of the test reports we submitted to our customers in 2017 were related to the shift to electric vehicles, including EVs and PHEVs. 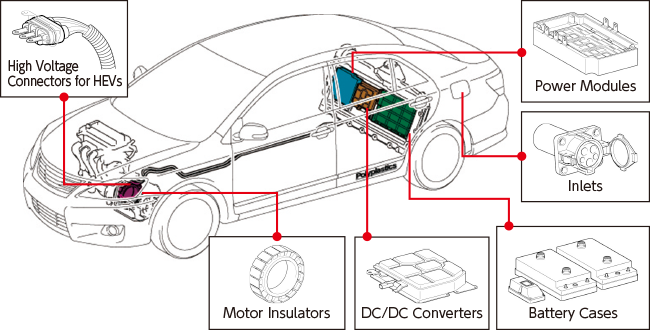 Looking Toward the Future of EVs and Society

Currently, the main problem with EVs is their short driving distance. In the future, the battery (which controls the driving distance) may be switched from the current mainstream lithium ion battery to the increasingly popular all-solid-state battery, which has a superior capacity, output, and lifespan. There is also a trend of changing the raw materials used in power modules in the aim of achieving a longer driving distance as well as miniaturization of the vehicle body.
If the electric vehicles evolve in this way, it’s predicted that the battery and power module components will be subjected to higher temperatures, meaning that higher heat resistance and thermal shock resistance will be required of the insulators around them. In other words, it’s likely that there will be more opportunities to utilize high-function engineering plastics in those parts.
In the future, Polyplastics will continue to contribute to realizing a low-carbon society through the development of resins that anticipate the needs of the market.