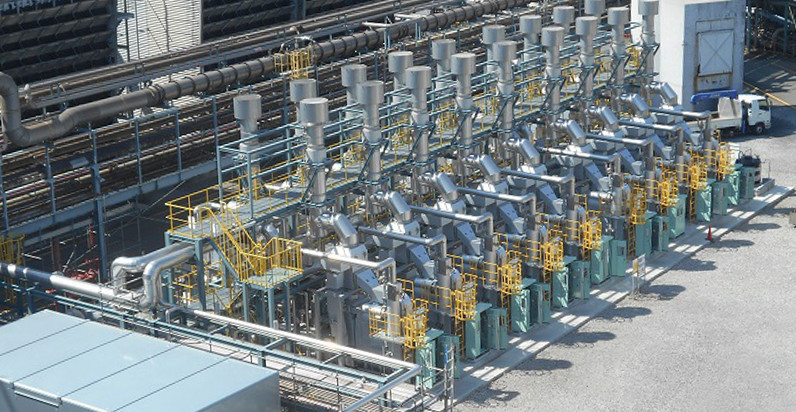 This fiscal year, Polyplastics’ Fuji Plant implemented a major facility changeover of its energy supply system. This section covers the process of the Fuji Plant’s rebirth as a clean plant.

The Reason for Facility Changeover

In recent years, our production sites have shifted overseas, and the role required of the Fuji Plant has transitioned from mass production to manufacturing high-end products in small quantities. As a result, the conventional boiler system had become excessive, causing considerable energy loss, and it was predicted that significant maintenance costs would be needed to continue to use existing facilities safely. For these reasons, the Fuji Plant began to consider switching its energy supply system.

Finding an Optimal System for the Future of Fuji Plant

The Fuji Plant faced many choices in this changeover. What should we use for an energy source to generate steam? Should we generate electric power internally, or purchase it from another company? We spent years deliberating and debating so we could consider all potential possibilities and find the right answer for the future of the Fuji Plant. Beyond the economic aspects-such as equipment investment, operating cost, and fuel prices and their dramatic fluctuations-another important factor in this decision was the environmental impact. Also, given that the factory is located in a residential area, it was necessary to sufficiently consider the safety of carrying in fuel. In the end, the answer we arrived at was to supply steam using multiple LNG package boilers and purchase electric power externally.

The emissions of environmentally hazardous substances were kept lower than the standard values even when the conventional boiler facility was in operation. But now, by changing the fuel from C fuel oil to liquid natural gas (LNG), the amount of environmentally hazardous substances contained in the fuel itself has been reduced significantly. The plant as a whole is expected to be able to reduce emissions of sulfur oxide by 99%, nitrogen oxide by 30%, dust by 60%, and CO₂ by 20%* as a result of this change. 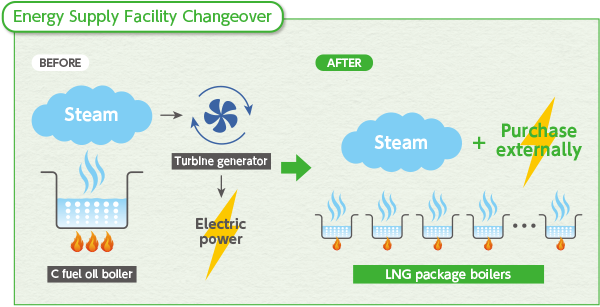 The conventional system required daily tasks such as changing the burners or heating the C fuel oil before beginning operation, but this is no longer necessary. Another benefit of the new system is that even if one boiler malfunctions, the others can cover it, preventing any negative impact on production. It’s also possible to safely stop and repair a damaged boiler as needed, which greatly reduces the operational burden.

3. The Flexibility for Future Fluctuations in Production Volume

The conventional large-scale system was able to maintain a high operating rate with high production volume, but even at low production volume, it needed the same amount of energy to operate, regardless of the amount of steam or electricity to be generated, so operation was not economical. Under the new system, however, the Fuji Plant can freely adjust the number of boilers in operation to increase or decrease the production volume, so we can minimize the energy used in operation and always provide steam at the optimal efficiency.

For a plant that is more considerate to the local environment

Introducing these LNG package boilers has taken the Fuji Plant’s green energy efforts to the next level. As employees of a company that operates chemical plants, we hope that we can contribute even a little to environmental preservation and to the peace of mind of local residents, and we want to do all we can to maintain and further improve the environment in the future as well. 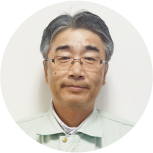 To All Our Stakeholders

The decision to change the energy supply system was based on our desire to reduce CO2 under our environmental plan, as well as economic considerations. It will help us to achieve operation in line with production volume, and also help make us a more environmentally friendly plant. The Fuji Plant cares for the neighboring residential area and the beautiful seaside nearby, and is working sincerely every day so as to continue to contribute to society and operate with the trust of the surrounding community. We appreciate your future support and understanding.